What drives a corporate VC to invest in spinoffs? A way to radically innovate a value proposition

Creating a startup is like climbing Mount Everest. It is a challenging feat that involves patience, practice, and team effort. People are hardly ever successful on the first try and require multiple climbs to conquer the mountain. The climbers come across treacherous slopes and the higher they try to get, the more hostile the environment will treat them. Climbing higher will also reveal to them how high the goals or peaks are that they have set for themselves. This challenge requires that starters set milestone goals, climbing smaller peaks first to test whether they are capable of climbing further to the summit.

For entrepreneurs, this challenge is very similar to founding a startup. It is unlikely that an entrepreneur is successful in building the company of his/her dreams from the first try. Sometimes guidance is needed and just like Sherpas (experienced mountaineers) support climbers and guide them to the summit, entrepreneurs need investors and mentors to aid them towards the road to success. Getting support from investors and mentors is not a guarantee of success but the advice and help it brings is invaluable and can make or break a startup. One type of investors is a Venture Capitalist (VC). VCs are early believers in the vision and story of the entrepreneur (or intrapreneur within a corporation) and they have the financial resources and expertise to give the entrepreneur an initial push towards reaching the summit.

Difference between a corporate and an institutional Venture Capitalist

At VODW, we have experience with the internal funding procedure for spinoffs amongst our clients and we can benchmark the differences of a corporate VC (CVC), which is a fund created by a corporation to an institutional VC (IVC), which is the amalgamation of wealthy investors who want to invest in riskier investments. The operations of each VC are the same: to invest in high-potential and emerging companies that will create more value for the investor. The nuance, however, lies in the goals. In the case of an institutional VC, the goal is to maximize return and make the profit as high as possible. On the other hand, a corporate VC also wants to be profitable but also has other strategic interests at heart to further the agenda of the corporation. These two differences in goal can imply vast differences in the investment process, including candidate screening, coaching, and the eventual disinvestment.

Why a CVC creates a spin-off

To illustrate the difference between an Institutional VC and a Corporate VC let’s take the example of a corporate-funded venture in the health and well-being domain, we were recently involved in. The parent company, an established insurance company, in this case, suspected up front that the business case and profitability of the new venture would be negative. However, launching this venture would bring much exposure and the marketing and brand equity value would be enormous. Therefore, the decision was made to go ahead with the venture. The decision was driven by the broader strategic agenda of the mother company. This type of rationale is far less common in institutional VC’s.

Another reason for Corporate VCs to invest in ventures is for the corporation to invest in more risky and disruptive innovation. Why these innovations cannot be done in-house include the following reasons:

Let us take a hypothetical example of an insurer who wants to launch a new direct sales service to see why a product or service can be harmful towards a brand. The insurer’s intermediaries (brokers or agents) might feel threatened by this initiative and might retaliate against this insurer, because they fear this new (direct-to-consumer) value proposition could cannibalize their own business. A channel conflict could ensue, and this damages the insurer. If this insurer would spin the product or service off into a separate entity (and in this case, a separate brand), the risk of a channel conflict will decrease.

We can take Payconiq (an electronic payment app) as another well-known example of partnerships that would normally not occur. Payconic is a spinoff of ING that has gained the support of other major banks in Belgium during its lifetime. If ING would launch this service under the ING brand, its competitors would be unlikely to join ING in using this service and the service would receive much less traction on the market due to low support. The service would cease to exist. Due to the support of the other banks, the application is now widely supported by business owners and users alike and it keeps growing.

How does a VC operate? 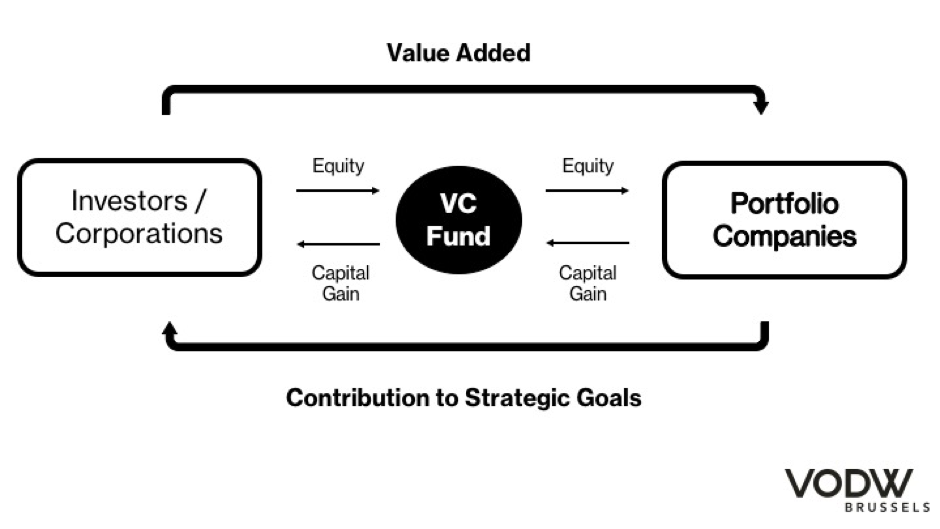 So how does an institutional VC operate? Their investment process is cyclical. Several or just one wealthy investor, which are called the limited partners (LP), amass their money into a VC fund and this fund scans and assesses candidates. The managers of the VC fund, the general partners (GP), run the day-to-day operations of the investment such as monitoring and functioning as a soundboard for feedback on the operations of the spinoff/startup/scale-up. The LPs can add value by giving access to its network, patents or other resources but usually do not have a say in the daily operations of the fund. In the end, the portfolio company should contribute to the eventual goals of the investor. This could be monetary or strategic in nature.

Nowadays, the corporate VC industry has reached a certain maturity in terms of returns that it is starting to behave as traditional VCs and making this difference in goal more nuanced. Examples for this are imex.xpand, Google Ventures and Samsung NEXT. They not only have spinoffs but are actively looking for unaffiliated startups to deliver and create value. Their goals are not only strategic but also financial, technological and even philanthropical as they are reinvesting the returns of their successful ventures in future, new ventures.

VCs, however, are not the only source of funding. There are plenty of other possibilities as a startup or spinoff such as business angels, ICOs, crowdfunding etc. which should also be considered and each with their own benefits and disadvantages.

What I would like for you to remember is that spinoffs give a corporation the opportunity to do something completely different, to take on a risky adventure and still be able to run its daily operations and additionally proving knowledge spillovers. These spinoff teams behave like a startup, very lean and quickly responsive to changes in the market. They can explore new markets and new geographies faster than the corporation itself.

One of the services we deliver at VODW is to provide additional “firepower” and support to these corporate spinoffs and to make sure that their development is agile, structured and successful. If you see an opportunity to cooperate with us regarding this subject, do not hesitate to contact me! Thank you for reading this blog post and hopefully see you on another of our VODW blog posts.

Previous blog What variety of skills do I need to put ‘UX designer’ as my job title? Volgende artikel 3 key questions that help you articulate your value proposition
View all blogs in the category Change Management